Getting Ready for Air-Conditioning Season 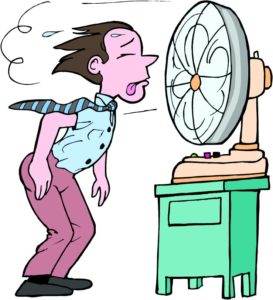 A building’s central air-conditioning system must be periodically inspected and maintained in order to function properly. While an annual inspection performed by a trained professional is recommended, homeowners can do a lot of the work themselves by following the tips offered here.

The exterior condenser unit is the large box located on the side of the house that’s designed to push heat from the indoors to the outdoors. Inside of the box are coils of pipe that are surrounded by thousands of thin metal “fins” that allow the coils more surface area to exchange heat.

Follow these tips when cleaning the exterior condenser unit and its inner components — after turning off power to the unit, of course.

Condensate drain lines collect condensed water and drain it away from the unit.  They’re located on the side of the inside fan unit. Sometimes there are two drain lines—a primary drain line that’s built into the unit, and a secondary drain line that can drain if the first line becomes blocked.

Homeowners can inspect the drain line by using the following tips, which take very little time and require no specialized tools:

Air filters remove pollen, dust and other particles that would otherwise circulate indoors. Most filters are typically rectangular in shape and about 20 x 16 inches, and about 1 inch thick. They slide into the main ductwork near the inside fan unit. The filter should be periodically washed or replaced, depending on the manufacturer’s instructions. A dirty air filter will not only degrade the quality of the home’s indoor, but it will also strain the motor to work harder to move air through it, increasing energy costs and reducing energy efficiency. The filter should be replaced monthly during heavy use during the cooling seasons. You may need to change the filter more often if the air conditioner is in constant use, if any family members have respiratory problems, if you have pets with fur, and/or if it’s particularly dusty indoors.

When the cooling season is over, you should cover the exterior condenser unit in preparation for winter. If it isn’t being used, why expose it to the elements? This measure will prevent ice, leaves and dirt from entering the unit, which can harm components and require additional maintenance in the spring. A cover can be purchased, or you can make one yourself by taping together plastic trash bags. Be sure to turn the unit off before covering it.

Air-distribution registers are duct openings in ceilings, walls and floors where cold air enters the room. They should be closed after the cooling season ends in order to keep warm air from back-flowing out of the room during the warming season. Pests and dust will also be unable to enter the ducts during the winter if the registers are closed. These vents can typically be opened or closed with an adjacent lever or wheel.  Remember to open the registers in the spring before the cooling season starts.  Also, make sure they’re not blocked by drapes, carpeting or furniture.

In addition, homeowners should practice the following strategies in order to keep their central air-conditioning systems running properly:

What is an evaporative cooler?

An evaporative cooler, also known as a swamp cooler, wet-air cooler, and desert cooler, is a device designed to cool air via the evaporation of water.  This is a natural and energy-efficient way to achieve a comfortable indoor temperature.  An evaporative cooler cools indoor air by drawing outdoor air into the unit and passing it over pads that have been saturated with water from a reservoir in the unit.  The water evaporates into the air as it passes over the pads, and the result is a 15° to 40° drop in temperature.  The cooled air is then directed through interior areas where a lowered temperature is desired, forcing warm air outside through open windows.  Because of this, evaporative coolers steadily circulate fresh air through the interior, unlike air conditioners, which circulate the same air over and over again.  They also cost far less than air conditioners and use around a quarter of the energy, making them a very efficient alternative.

How does evaporation work to lower air temperature?

How an Evaporative Cooler Works

An evaporative cooler is basically a large fan with pads, moistened by water, which are located in front of the fan.  The fan pulls the hot, outside air inside, and the air is cooled after passing over the wet pads.  The pads are usually made from wood, wool or fiber, though some plastics and melamine paper are now also used to make cooler pads.  However, wood absorbs some of the water, which allows it to cool the passing air to a lower temperature than some synthetic materials.  The thickness of the pad also plays a part in the cooling efficiency because a larger pad allows longer air contact, so a 10-inch pad is more efficient than a 4-inch pad.  The pads need to be replaced every season or two, but they are fairly inexpensive.

Small water distribution lines wet the top of the pads, which become soaked.  Once the water trickles through them, collecting at the bottom in a sump, a small re-circulating pump sends the water back to the top of the pads to soak them again.  When enough water is lost through the evaporation process, a float valve adds water to the sump so that the pads can continue to be soaked.  Under normal conditions, a cooler may use between 3 and 15 gallons of water per day.

Because evaporative cooling takes air from the outdoors, cools it, and circulates it indoors, there must be a way for the warm air inside to escape when it is displaced by the incoming cool air.  By leaving doors and windows open strategically, it is possible to direct the path of incoming cool air to areas where it is needed most.  Even smaller units can be effective for larger areas when used in this way.  Many types of cooling units are currently manufactured, including small units for installation in windows, as well as large units meant to be installed centrally to blow air through ductwork and into individual rooms.

The most important factor to keep in mind when determining whether an evaporative cooler can be utilized effectively in a particular situation is the moisture content of the outside air.  Since the air will not hold additional moisture once it reaches its saturation point, no drop in temperature will occur through evaporation if the air is already saturated.  Because of this, evaporative cooling cannot be used effectively in wet or humid climates.  Meanwhile, in areas where the air is hot but humidity is low, the coolers can be used as a cost-effective and energy-efficient alternative to air conditioners.  Such areas in the U.S. include Colorado, Utah, New Mexico, Arizona, northern Texas, and some parts of California.

Here are some advantages and disadvantages of using evaporative cooling vs. traditional, phase-change air conditioners.

Evaporative coolers can be less expensive and environmentally friendlier alternatives to traditional air conditioners, depending on the climate and other factors.  Like any home system, homeowners should plan on becoming familiar with their evaporative cooler in order to maintain it seasonally.

Thermostats are devices designed to control the heating and cooling system in the home so that the air temperature remains comfortable. Homeowners should understand how thermostats operate, as well as the more common problems associated with them.

Thermostats can be manually controlled or set to activate automatically based on timers or room temperature readings. Most thermostats contain two meters:  the “set” temperature that the thermostat is asking for, and the actual temperature. On a traditional dial-type thermostat, the user can increase the set temperature by rotating the dial clockwise, and lower it by rotating it counter-clockwise. Newer thermostats usually have digital displays, which can be used to adjust automated heating and cooling schedules.

In order to avoid false or “ghost” readings, which will cause unnecessary furnace or air-conditioner cycling, the thermostat must be installed so that it correctly reads the room temperature.

The following locations may cause the thermostat to give false readings:

Maintenance and Other Tips

A Few Notes on Energy Savings

Using a programmable thermostat, you can adjust the times that the heating and air conditioner go on and off according to a preset schedule. As a result, the equipment doesn’t operate as much when you’re asleep or when the house (or a part of it) is empty. Programmable thermostats can store and repeat multiple daily settings (six or more temperature settings a day) that you can manually override without affecting the rest of the daily or weekly program.