Your House Number – Just may save a life

When you get a Shawn Chesney Home Inspection, you get a long list of items inside and outside the home checked for functionality and also safety. Our Home Inspectors look at many things to insure you are well informed and are aware of simple things to insure you are as safe as possible in any situation. One of the things to consider is should there ever be an urgent need for emergency responders to attend your home, you want them to be able to find it as easily as possible. Clearly labeling your home with the house number is vital. 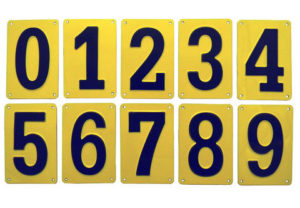 House numbers should be clear enough so that police, the fire department, paramedics, etc., can quickly locate properties in an emergency. House numbers are often the only way that first-responders can identify their intended destinations. A number of jurisdictions have begun enforcing laws through strict fines for homeowners who do not comply with laws that impose requirements for house numbers.

Many municipalities and counties have implemented ordinances requiring property owners to standardize the display of their house numbers or face stiff fines. Typical requirements include displaying street numbers in block numbering at least 4 inches tall and ½-thick, with a reflective finish or with a source of night-time illumination.

In order for house numbers to be visible from the street, they should:

Even if a house number is currently adequate, it might need adjustment in the future. The following are common reasons for future adjustment:

House numbers serve a critical function for emergency personnel, so homeowners should make sure that they’re  clearly displayed.