Radon in the Home

Radon in the Home

Radon is a radioactive gas that is formed naturally by the breakdown of uranium in soil, rock and water. As a gas, radon is slowly released from the ground, water, and some building materials that contain very small amounts of uranium, such as concrete, bricks, tiles and gyproc. Radon gas breaks down further to form additional radioactive particles called radon daughters, or “progeny” that can be breathed into the lungs.

Radon cannot be detected by the senses, i.e., it is colourless, odourless and tasteless; however, it can be detected with special instruments. When radon is released from the ground outside it mixes with fresh air and gets diluted resulting in concentrations too low to be of concern. However, when radon enters an enclosed space, such as a house or basement, it can accumulate to high concentrations and become a health risk.

Radon concentrations fluctuate seasonally, but are usually higher in winter than in summer, and are usually higher at night than during the day. This is because the sealing of buildings (to conserve energy) and the closing of doors and windows (at bedtime), reduce the intake of outdoor air and allow the build-up of radon.

A house can act like a vacuum for underground gases. The air pressure inside your house is usually lower than in the soil surrounding the foundation. This difference in pressure is caused by things like the use of air exchangers, exhaust fans and clothes dryers. When air is pushed out of the house, outside air is pulled back in to replace it – much of the replacement air comes from the ground surrounding the house and brings gases such as radon with it.

Radon can enter a house any place it finds an opening where the house contacts the soil: cracks in foundation walls and in floor slabs, construction joints, gaps around service pipes and support posts, floor drains and sumps, cavities inside walls, and the water supply.

The only way to find out if your house has a radon problem is to measure the radon concentration inside it.

Radon gas and radon progeny in the air can be breathed into the lungs where they breakdown further and emit “alpha particles”. Alpha particles release small bursts of energy which are absorbed by nearby lung tissue. This results in lung cell death or damage. When lung cells are damaged, they have the potential to result in cancer when they reproduce.
The only known health risk associated with exposure to high levels of radon in indoor air is an increased lifetime risk of developing lung cancer. The risk from radon exposure is long term and depends on the level of radon, how long a person is exposed and their smoking habits. If you are a smoker and are exposed to elevated levels of radon your risk of developing lung cancer increases significantly.

Other than lung cancer, there is no evidence that radon exposure causes other harmful health effects such as any other form of cancer, respiratory diseases such as asthma, or symptoms such as persistent coughing or headaches.

The Canadian guideline for radon in indoor air provides Canadians with guidance on when remedial action should be taken to reduce radon levels. The Canadian Guideline is as follows:
“Remedial measures should be undertaken in a dwelling whenever the average annual radon concentration exceeds 200 becquerels per cubic metre (200 Bq/m³) in the normal occupancy area. The higher the radon concentration, the sooner remedial measures should be undertaken. When remedial action is taken, the radon levels should be reduced to a value as low as practicable. The construction of new dwellings should employ techniques that will minimize radon entry and will facilitate post-construction radon removal, should this subsequently prove necessary.” 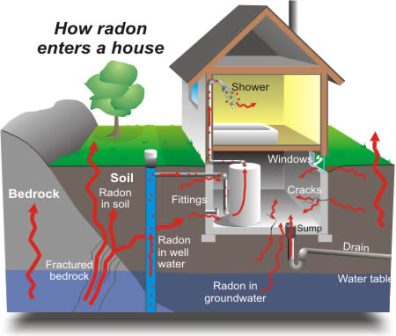